WARNING This documentation is for Pydio 8 (PHP). Time to move to Pydio Cells!

Files versioning allows you to keep track of file changes.

Disclaimer : If you installed Pydio by the linux repository ( apt / yum ), you must install the "pydio-plugin-meta.git" package.

The current implementation is based on Git for the sake of simplicity, and it has some drawbacks : 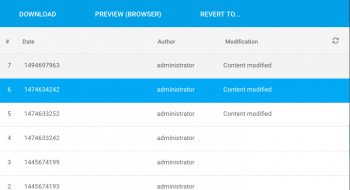 To enable this feature go to Workspaces & Users > Workspaces > Choose a workspace and edit it and Git-based Versioning to the workspace.

Once installed, you will be able to see a list of actions of what happened on a given file, eventually download a given previous revision, or directly reverse the current revision to a previous one (thus creating a new revision). To install, simply make sure that the GIT command is accessible through the command-line on your server, and that the PEAR/VersionControl_Git client is installed as well.

Previous implementation was based on SVN instead of Git. As they share some client resources (history browser), the meta.svn plugin must be installed as well (it is by default).

When switching for the first time to this workspace and making a file operation (upload, move, whatever), a "git init" operation will be launched. If you encounter strange errors, maybe you can manually initiate the workspace by applying the following command line at the root of your workspace path :

Other versioning systems should be introduced in future versions, either leveraging specific access drivers capacities (cloud storage generally directly provide versioning, accessible through an API), or by storing diffs and version in an additional database.

Enabling quotasWatches and Notifications
Back to top