As explained in previous section, all Actions receive an Input Message that contains some arbitrary data. Below are described the currently supported data types.

Fields "Nodes", "Users", "Roles", "Workspaces" are the most commonly used by actions. For example, a message containing just a given reference to a file would look like:

In many cases, action parameters will give you enough flexibility to ignore the data type format that comes in input. But soon you will want to use one specific piece of information to be treated by the action. That's where Golang Templating comes into place. Given the previous example, let's say you want to write an action that prints out the Path of the file passed in input, you would use the following syntax:

or as a shortcut (as first Node, first User, etc... are passed by default as Node, User,... fields to the template):

See the detailed section about Scripting Capabilities to learn more.

When triggering jobs on events, the data associated with that event will be implicitely appended to the first action Input.

Typically, when a job reacts to an event like "Node Created", the associated Node (file or folder) is automatically appended to the job first Input.

You may need to explicitely load some data to feed a given sequence of actions. This is done using Queries that allows you to select rows (like you would in an SQL database) based on various criteria. One can for example list all files under a certain path, or list all Workspaces updated since a certain period, etc.

The following image shows the available Queries that can be used to select data to feed any action. To create your own query, select a query type and then drop the query on the target action. 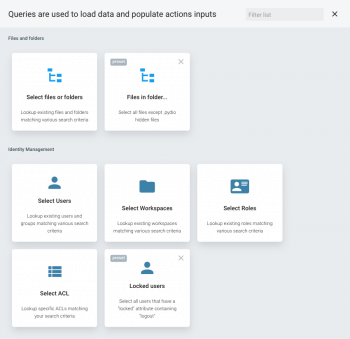 When Queries return many results, you may either choose to pass all the results along as a bulk to one specific action, or to fan out each result as a unique message passed to many instances of the same action. In the later case, multiple action instances will be triggered in parallel, each one processing one of the result.

Example1: collecting data to spin one action with N results:

Example2: collecting data and spinning N actions in parallel. You can cead more about Parallelism and Concurrency and how to make the most out of this powerful feature.

Sometimes you have a message that contains N results and you actually want to trigger N actions instead. You can use the "Fan Out" flag of the selector, without any criteria, to just split the result into N messages => N actions.

Once some data is transferred from one action to another, you can perform dynamic filtering to e.g. reduce the amount of data to process, or continue the sequence only if received data meets certain conditions. Filters offer the same kind of criteria as would the Queries, but are applied on the current set of data.

The following image shows the available Filters that can be used to select data to feed any action. To create a filter, select the filter type and the drop the filter on the connector between the two actions where you want the filtering to be applied. 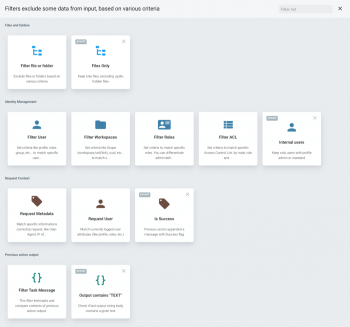 As explained above, filters are useful to limit the data that we want to process, but can be also used as simple "show-stoppers": if condition on data is not met, just stop there. In that case, you may want to provide an alternative sequence of actions. Switching a filter to "Conditional" mode will allow you to create "if/else" branches. 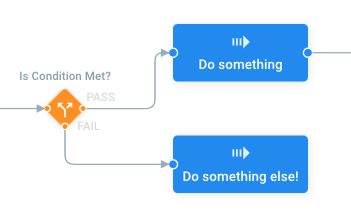 Both Queries and Filters are built in a similar fashion: they are a composition of criteria that can be combined using sub-queries that will be applied in two possible ways:

Although queries and filters are "typed" components ("Files/Folders" does not offer the same criteria as a "Users"), their "Query Builder" look the same.

See all the available building blocks for creating Queries and Filters in the dedicated section.

Actions and MessagesTriggers
Back to top