Dynamic mapping of LDAP groups to Pydio roles is a powerful feature allowing administrors to keep users management on the LDAP-side, while Cells will automatically map these groups to roles. Setting Cells access lists on the roles is done once, and the synchronization will update users and their permissions as it runs.

If your LDAP server supports the memberof-overlay in LDAP filters, each user object in LDAP response may have a "memberOf" attribute. Generally, this list of groups may contain system groups that we don't want to import and we are looking for only a small set of groups. Cells provides a configuration interface with simple but yet flexible parameters to help you refine the groups imported inside Cells.

This is a specific case of mapping, in order for a user to be assigned one or more roles in Pydio Cells, depending on the memberOf attribute defined in your external directory. memberOf is a multiple value attribute of user object which itself contains a list of groups where this user is a member. You should define a rule.

The values of memberOf attribute can contain any group of the LDAP directory: you might want to narrow down the list of the groups that are to be mapped in Cells by using group filtering. 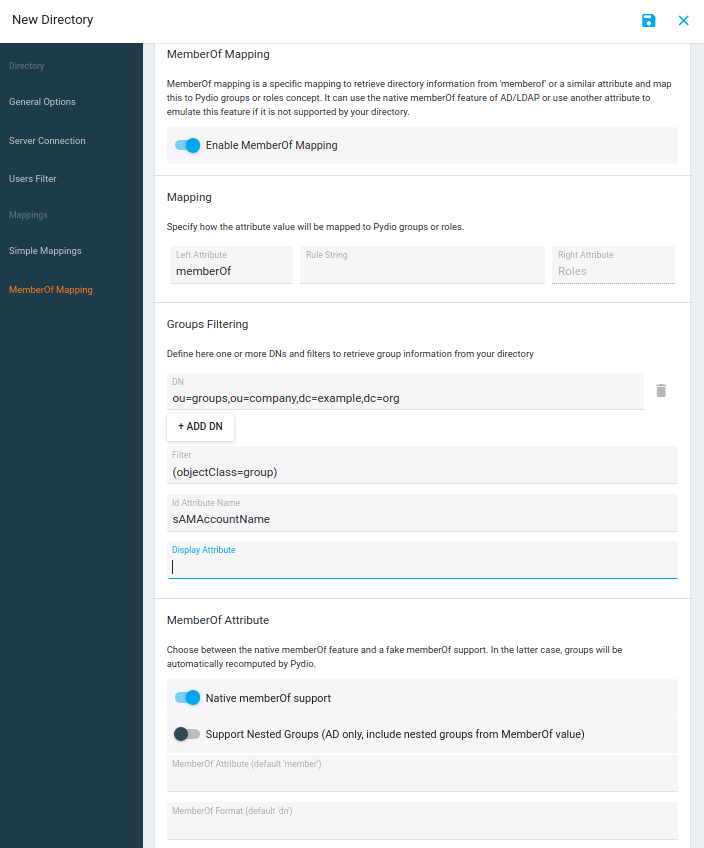 The above screenshot shows an example of memberOf mapping, where:

1) toggles this feature ON and OFF

2) Mapping: defines the name of the attribute that is to be used in your LDAP server. This is useful to emulate the memberOf feature if it is not supported by your implementation.

3) DN: is the DN of one or more organization unit in the LDAP directory in which the connector searches for groups. If memberOf values have some groups in other locations, they will be ignored.

5) ID Attribute: Pydio will take the value of this attribute of group object to use as Role ID in Cells.

Some LDAP directories do not support memberOf attribute by default.
If you turn off the Native MemberOf support toggle, Cells tries to calculate this attribute from the Fake memberof Attribute value and its format.

Values of these two options are usually:

As explained in the introduction, and due to the Master/Slave model of the integration, we strongly advise you to perform following fine-tuning on your instance.

The easiest way to prevent LDAP-defined users to change information that are defined in your external directory(ies), is to define a system-wide rule that will disable the My Account button for the relevant users. This is achieved easily:

You are then set: the My Account button is then hidden for all corresponding users.
Depending on your specific configuration, you might want to do this for various groups or define a specific role that can be applied to relevant groups and users.