WARNING This documentation is for Pydio 8 (PHP), EOL end 2019. Time to move to Pydio Cells!

Role can be found in "Workspaces & Users" > "People"; you can see in the left of the panel 2 tabs ( Groups and Roles ). When you click on "Roles" 2 new buttons can be found at the bottom of the panel ( + Role and Edit ).

A role contains the following informations:

You can see the various categories to the corresponding tabs of the edition interface in the Settings workspace (see screenshot below). 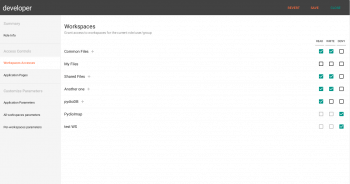 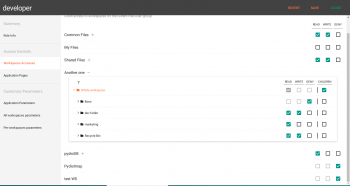 The power of the « Role » object is that it is a shared concept that is « additive »: a sequence of n roles can be « added » to create a new role, each role n in turn overriding the various parameters of the role n-1. That way, one can define for example a given plugin parameter value for in role1, then refine this value in Role2, and if a user has these two roles in this order, the latest value will be taken into account.

Practically, one will probably not want to define X roles and apply them one by one to the users. But the other power of this object is that it is shared by Groups and Users as well. Which means a user automatically will provide its own role (internally name AJXP_USER_/userlogin), and if he belongs to a group, this group will also provide a specific group (named AJXP_GRP_/groupPath/groupName).

You can see that editing a user or a group, you’ll find the same tabs "Workspaces Accesses", Actions and Parameters that you would find in the role edition. They correspond to the specific roles created for each object ( a group or a user). 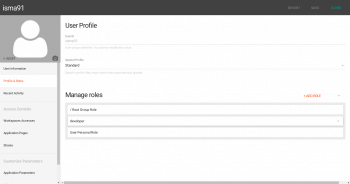 Once configured, the various roles that are applicable to a user will be « added » in the following order: first the groups roles (if a user belongs to a subgroup, then the parent group role is applied, then the subgroup role), then the administrator-defined roles, then the proper user role. This is summarized in the figure below:

For example, a user U1 from group G1, to whom one have applied a specific role R, will then have a « merged » role that result in the addition of the following:

This « refinement » process is very flexible, and allows you to configure the accesses, parameters and actions of each plugin, for each workspace, at a very fine level. Generally, the « Groups » is a right place to preconfigure a couple of parameters, but sometime you’ll want to disable some specific action for a given user, in which case you’ll edit directly the user role.

Another interesting feature of the roles one creates manually in the application is that they can automatically be applied to a given profile of users. There are currently four profiles of users: Standard, Administrator, Shared and Guest.

Groups Admin and DelegationAction parameters
Back to top